Congratulations are due to no less than 15 of our pupils who excelled themselves in February’s Linguistics Olympiad.

Highgate School took ten bronze, four silver and one gold award. Gold was won by Y13’s Sarah, who has been taking part since Y9:

“I’m so delighted to have achieved a gold award and qualified for the second round of the Linguistics Olympiad again this year. This has been my 5th time sitting the UKLO, and once again it has been such a fun experience.

I find it a really interesting challenge to make deductions about an unknown language based on grammar patterns in a small data set. It effectively abstracts the language to a logic problem, which explains why there seem to be lots of good mathematicians who also do well in UKLO. I’m really looking forward to the second round, and hopefully I might have a chance at making the UK team for the International Linguistics Olympiad (IOL) in Latvia this summer!” 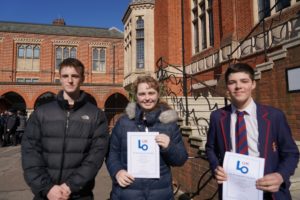 Daniel, Y10, a silver winner who has taken part in Linguistics Olympiads for several consecutive years, winning gold in 2019 and very narrowly missing it again this year, said:

“I love doing the UKLO because I find the ways in which languages work fascinating, and I get to test my skills.”

Other silver winners were Y13’s Harry and Y11’s Oliver. Exams featured unseen scripts in ancient Greek Cypriot & Portuguese creole, where pupils have no prior knowledge of these languages. We were delighted to see a total of nine Y10 winners!