I can’t believe that the Labour Party Conference agenda on private schools was planned to coincide with the admissions seasons for London schools, but it, the agenda that is, has certainly added to the sometimes fevered considerations which beleaguer parents and carers at this entrance test season! I always explain to prospective parents, expecting me to wax lyrical about exam results, that the key question has to be whether their child’s education at a school such as Highgate will make their community, their world, a better or a worse place. Forgive me, kind readers, if I labour this point (no pun intended).

I’m penning this blog from our annual conference, that of HMC, the organisation of ‘leading independent schools’ to which Highgate and many other well-known schools belongs. It is celebrating its 150th birthday, conscious that it has come a long way since thirteen schools travelled to Uppingham in 1869 for their first ever meeting. Highgate’s dynamic second founder, Dr John Bradley Dyne, was HMC’s third Chairman.

Nowadays journalists attend the public sessions, and Heads are treated to all manner of varied talks and workshops. Our Chair this year, Fiona Boulton from Guildford High School, has taken leadership as her broad theme, and clearly has a persuasive way of asking would-be speakers: so far the broadcaster and sports journalist, Clare Balding, and former Director-General of the BBC and CEO of the New York Times, Mark Thompson, have appeared on stage. Thompson’s thesis that, in our world of 24/7 news it has never been more important to tell your story clearly, chimes with my growing sense that the ease of getting information to one’s readers has seen the business of communicating anything, not least your core story, become more and more challenging.

The message for us delegates was clear: in a month when independent schools have been under attack, it’s unwise to assume that anyone, even those with a benign interest in independent education knows, can see beyond the caricatures we find in websites and newspapers alike.

So let’s take a school’s stellar exam results (stats like our 49% of all GCSE grades being at the new tip-top grade 9): outsiders could be forgiven for assuming that Highgate is run like an academic sweatshop, where exams are the starting point; yet our mantra is that exams will always have a distorting effect on the way we wish to teach. It’s only by having, articulating and sharing a humane vision for teaching and by liberating teachers to teach the subject, not the exam spec, that their passion can ignite every child’s wonderfully diverse curiosity.

Why do we have homework remission weeks? Not only to give pupils a break and a spur to get into their hobbies, their music and their recreational reading, but to signal to everyone that good learning is part of a healthy balanced life, not a forced march to be endured.

In my diary for next week is the Independent Schools Awards: the fact that we and our partnership with the London Academy of Excellence Tottenham (LAET) have been shortlisted for a school contributing to social mobility sounds promising: our young, sibling school celebrated its first university successes, with a hundred LAET leavers heading to elite universities across London and the country. Eight Highgate teachers work on secondment to LAET, supported by home departments, including our librarians, our HR, our US and UK university admissions and employability specialists, to say nothing of five Governors.

Year 12 students in both schools are planning their own conference on social justice, aiming to call influencers, politicians and commentators to account for the discourse about their future in which the youth voice is curiously silent or silenced. By the way, it’s not only rewarding to be able to play a part, but it brings unexpected bonuses: staff retention and recruitment thrive when opportunities to get involved in innovation and partnership abound.

The following week both schools, LAET and our Highgate schools – Pre-Prep, Junior and Senior – join forces for a massive sponsored walk to raise funds for the Great Lakes High School (GLHS) in Uganda: who wasn’t moved by Bishop Hamlet’s stirring, upbeat portrayal of the opportunities he is determined to create for the young people of Kirima when he spoke to us at Alexandra Palace at the House Vocal Competition?

It would be difficult to miss these core features of a Highgate pupil’s life, but there are some equally significant Chrysalis programmes which can fly under the consciousness radar: our longstanding partnership with Gladesmore School in Tottenham, where Highgate pupil volunteers join forces with LAET volunteers to mentor Year 7 pupils to ensure that their literacy and academic confidence are boosted in the crucial early days of transition to secondary school. For two terms, lessons, activities and coaching absorb these youngsters’ attention on Saturdays while back at Highgate, another group of Highgate students and teachers run confidence-building activities in art, drama, DTE and music for Haringey’s looked-after children (LAC, or children in care) whose outcomes nationally are desperately low.

I’m glad to say that even among Labour politicians our charity DNA is recognised: David Lammy MP told LAET leavers that he had waited 20 years for Tottenham to have a first-rate academic offering the equal of that which existed in the west of the borough. And gave me a bear-hug to show he had noticed where the inspiration and commitment had come from to make this happen.

I wrote earlier this term about ‘the tyranny of self-sufficiency’, and the paralysing, de-humanising effect on us of needing to be endlessly strong and resilient. I was at the time floating the importance of belonging, of feeling connected through need, through weakness, through healthy inter-dependence. I was thinking about the individual rather than the community as I did so, but it’s just as true for communities. Highgate School makes no sense without its connections to LAET Tottenham, to GLHS Uganda, to its Chrysalis schools.

Observers might wonder if these are relationships established because regulators look for evidence of, or justification for, our charitable status, but just as (brilliant) exam results are a by-product of clear-sighted, impassioned and scholarly teaching, so (sector-leading) public benefit qualifications are incidental to learning about self-fulfilment though service, connection across difference and empowerment through encounter.

Whoever you are, please look beyond the caricature! Thank you. 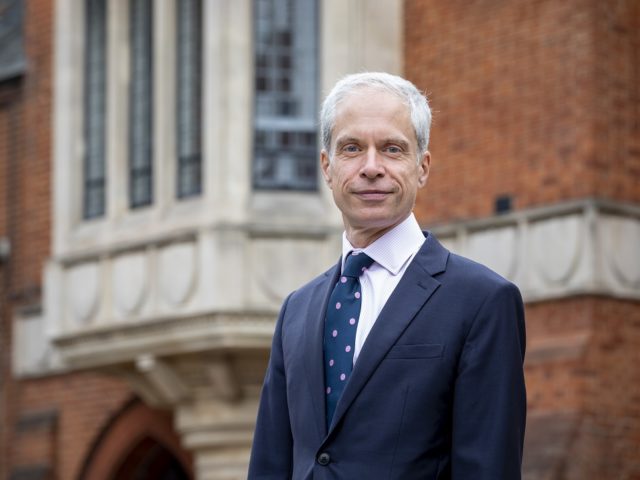