“On the last day of Michaelmas Term, nine Highgate pupils set off with Mr Blackshaw, Ms Isaksen and Mr Kenmir to represent the school at the Canada Cup in Jasper, Alberta. The event is a 10 year-old ski and snowboarding competition set up by a select group of English schools. It has steadily expanded from small origins and in 2019 Highgate was invited to join for the first time. Hopefully this account will give a taste of this great trip and inspire more Highgate skiers to follow in our tracks in 2020 and beyond.

Skiing in North America offers excellent, dependable conditions, but it takes a bit of getting there: an eight hour flight to Calgary and then a four and a half hour drive to Jasper, getting to the Hotel Crimson at 10 pm local time (4 am UK time, so we were fairly wiped out by then).

The races were on Sunday and Monday, so Saturday was our only chance to get our skiing dialled in. At the main skiing area, Marmot Basin, we met up with our coach for the week, Jill Sagan, a Calgary native. It was her job to get us ready for the racing – and from Tuesday onwards, to guide us, instruct us more and generally impart her mountain wisdom.

Team Highgate getting ready for the slopes 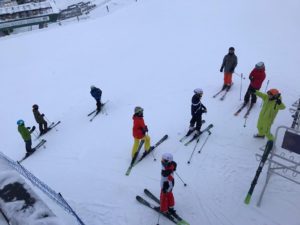 On Saturday there was an informal team-based dual slalom competition where we were separated into 16 groups with pupils from other schools (it was 15 degrees, so the only ice-breaking was metaphorical). The groups then raced in pairs with the slower group getting eliminated each round. Highgate’s Sebastian (Year 13) was a member of the victorious Team 16, representing our first honours!

Sebastian in the winning team for the GS dual relay

Post-racing we had free skiing with our new groups until lunch, perhaps to temper the inter-school rivalry that had clearly been bubbling all week. After lunch we were reunited with Jill and had free skiing in the afternoon before relaxing in the hotel and going for a small walk around Jasper.

The next day, Sunday, the actual racing began with giant slalom, and we received our bibs before inspecting the course at 9.30 am. The format was a morning and afternoon race, with the course being re-set in between, so you had to inspect the course again before Race 2. You had to complete both runs to be in contention. Despite icy conditions during the second race, all of the Highgate skiers managed to finish the day without a fall. After more free skiing we returned to the hotel for dinner. That evening we went to a local ice hockey match which was great fun, especially cheering on a home win for Jasper.

Joe on the giant slalom 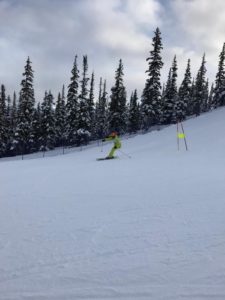 On Monday we had our final day of racing, with the slalom’s tight turns, the icy piste conditions and -20°C temperature testing everyone.

Jasper on the banana gate section of the course

As we headed out that night for our end of competition Gala Dinner at the Fairmont Jasper Park Lodge – a taste of luxury, Jasper-style – we had no idea where our skiers had placed. Sebastian had a victory in the dual slalom and I secured a bronze medal in the women’s slalom. However, the real winner that night was Maxim (Year 9) who managed to have the whole table in stitches with his  running commentary. 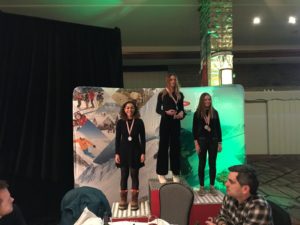 The team at the Gala Dinner 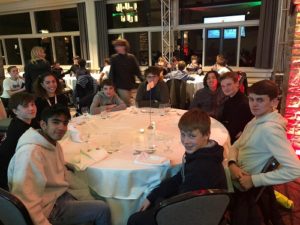 Tuesday was a full day of free skiing and our last day skiing with the Year 13s who were taking the Level 1 Ski Instructor course. Later that day, a snowball Battle Royal erupted between the Year 9s and Year 13s in which the biggest casualty was the woolly hat that was de-bobbled.

Jump Day for the team

Lucas getting some serious air 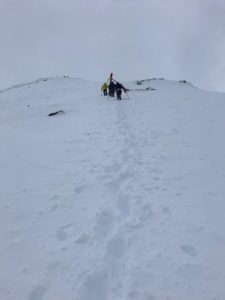 On Thursday evening, we headed into Jasper National Park for a moonlit snow shoeing trek across Pyramid Lake. The guides stopped briefly to drill a hole in the ice to show us how deep it was (24 inches), though we had our fire and hot chocolate on terra firma at the side of the lake. It was one of the highlights of the week: a unique and very memorable evening. 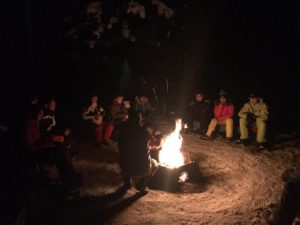 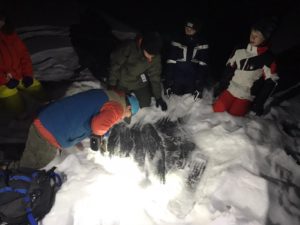 Friday was our last day of skiing. Sebastian, Joe, Rory and Mr Blackshaw all qualified as Level 1 instructors! We packed our bags that night before going for another walk around Jasper and heading out for pizza with Marlborough College. There was a demob happy atmosphere at dinner. 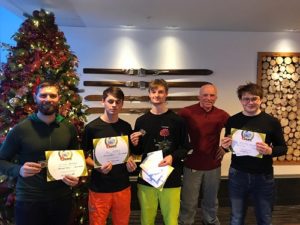 On Saturday we made the long journey back tired but thrilled by a week packed with good competition, great coaching, some great new friendships within the school and in others and some brilliant memories, as well as the ambition to do it all again in 2020, in bigger numbers and maybe to bring back a couple more medals!”