To mark COP26, pupils and staff at Highgate have been working on several events to enhance awareness of the global urgency of the climate crisis.

From displays around the School and lunchtime talks, to themed lessons, staff training, our own ‘Mock COP’ event, and one of our pupils offering remote support to student delegates at the international climate conference in Glasgow.

A highlight of the schedule was our Mock COP event that took place on Wednesday 3 November. Pupils in Y11, 12 & 13, from Highgate and four of our partner schools – London Academy of Excellence, Tottenham; London Academy of Excellence, Stratford; Acland Burghley and Highgate Wood School – came together to recreate their own UN-style negotiations. Facilitated and chaired by the Inter Climate Network, our Martin Gilbert Library was transformed into a conference venue, with 12 of the delegate countries represented. The 41 pupils were divided into small groups, mixed from different schools, to co-operate and collaborate on the challenges, targets, actions and demands for their assigned countries.

Ms. Mynott (Lead Teacher for the Environment at Highgate) who is coordinating our COP26 response programme, observed: “It was incredibly inspiring to see the extent of pupil participants’ confidence, knowledge, and passion. They bought into the event so much and came with a wealth of research and the right attitude to get involved. I was so impressed at how well they collaborated with the other pupils, often not knowing anyone in their delegation, and seeing them work together like that to fight for environmental justice; it gave me goosebumps!”

Gabriel, from Highgate, shared his experience of the day: “It was a brilliant event. We all learned so much about the issues affecting each country. We learned a lot about the processes involved in the real event, both about how important it is that action happens, but also how hard it is, and about the need for compromise.”

Jabiah, from London Academy of Excellence, Tottenham, (pictured) added: “I really enjoyed today – seeing how other young people are so passionate about the environment, and hearing their ideas. It’s really encouraged me to do more at my own school in the environment committee.”

Stephanie, from London Academy of Excellence, Stratford, agreed, saying: “I found it very inspiring to be around young people who are just as active in the climate discussion. I think it was very insightful to gather a better understanding of the complexities each country faces in increasing their climate action and the ways they can go about it, and the importance of collaboration internationally in tackling issues more efficiently.” 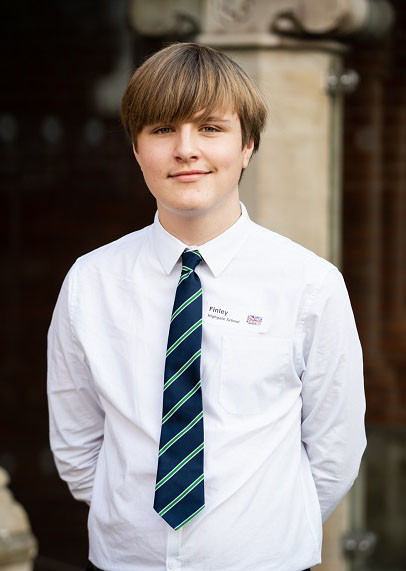 One of the pupils at the Mock COP event, Finley, Y11 Highgate, (pictured) is also involved with the UK Schools Sustainability Network’s (UKSSN) representation at the conference in Glasgow. Working remotely with pupils across the country, Finley is helping to decide and research information that a team of sixth formers will present at COP. The students have received expert support and training during their preparations for the event, including lectures on clean energy supplies, addressing climate anxiety and media training from the Grantham Institute for Climate Change. Finley explained: “To me, this is an amazing opportunity that allows me to be part of something that could really drive change, which is really inspiring as a young person who cares so much about our environment.”

Elsewhere in the Senior School, Y9s are learning about the climate breakdown during lessons, as well as recreating the Mock COP experience. Pupil members of the Environment Committee will lead 12 separate House Assemblies on the final day of COP (12 Nov) to inform their peers about the progress that has been made at the conference as well as some of the limitations, before asking pupils and Houses to pledge to make climate-positive changes in their own lives. A COP26 Top Trumps initiative was also launched by one of our Y10 pupils and has been shared nationally via the UK School Sustainability Network. A Climate & Sustainability INSET will help staff to learn more about the climate crisis and how to talk to young people about it. We are also encouraging parents and carers to continue these conversations at home.

There are several lunchtime lectures on the topic. In the Masaryk (Politics Society) session, pupils met to explore the political solutions to climate change. Dr Reilly introduced pupils to the Kaya identity as a tool for policy makers seeking to address CO2 emissions and global warming, prompting lively debate. 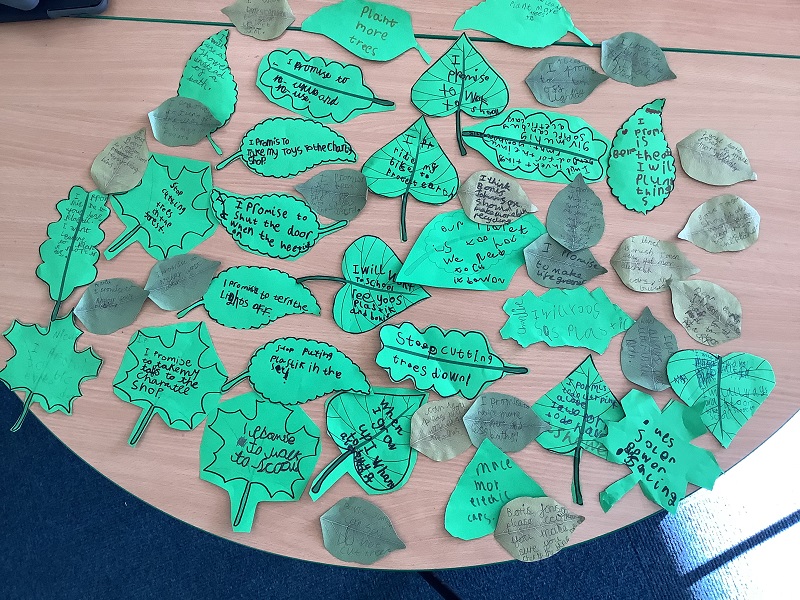 In addition to year-round sustainability values that are embedded across the School, Junior School pupils are having class/year group discussions about the perceived impact(s) of the event and about more tangible, achievable targets on an individual and collective basis within the local community and beyond. Similarly, Pre-Prep children have been making their promises to the planet, inspired by the WWF ‘Forest of Promises’ campaign. After learning about COP26, pupils wrote their promises on ‘leaves’ to help them relate our individual actions to the efforts of the international community to tackle climate change.

“Growing up in an era of climate crisis can be daunting, where young people feel powerless,” Ms Mynott explains. “Our programme over these two weeks is trying to provide some opportunities where they can see what it might be like to have some power and collaborate, and have their voices heard. The energy and commitment I’m seeing across the Highgate community, and in our partner schools, is so inspiring.”