We are delighted to announce that former Highgate pupil, Vivika Martini, has won The Royal Academy of Engineering Award for Exceptional Pupil Achievement, at the 21st Design and Technology Excellence Awards.

Vivika was a pupil at Highgate until 2019 and has just relocated to America to begin an engineering degree at UCLA (University of California, LA).  Throughout her time at Highgate, Vivika demonstrated a passion for learning and an enthusiasm for implementing new technologies. Her focus has always been sustainable design, which she demonstrated through her GCSE and A Level projects. “My interest in Design Engineering stemmed from my concern for the environmental issues that we’re facing. For me it is through engineering that I have the power to create solutions to these problems,” Vivika explains.

Her GCSE project was a bike mountable, wind-powered charger, “designed to help touring cyclists as well as cyclists in remote rural areas, like India and Africa, harvest wind energy cheaply to power electronic devices and stay connected.” The project earned her a nomination for the Triumph Design Awards 2019 and is something she hopes to return to in her University studies.

For her Y12 upcycling project, she designed an ecoplanter lamp, made from scrap aerospace parts, with added moisture tester and lights. Her Year 13 coursework focused on recycling bins with an integrated app to encourage people to recycle their waste and learn more about recycling: “I addressed the issue of cross contamination in rubbish bins which is a significant contributor to plastic landfill waste in the UK.” 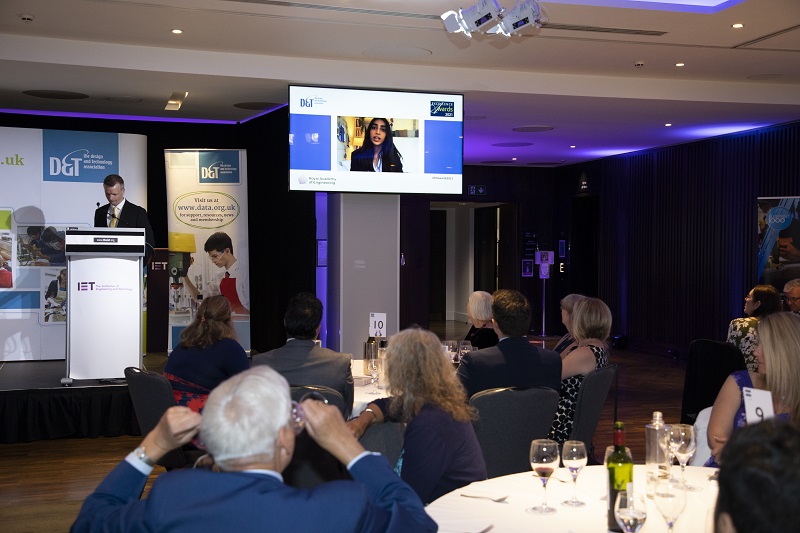 This prestigious awards ceremony is hosted by the Design and Technology Association to give professional recognition to individuals nominated by their colleagues for their unique work in design and technology education.

In her acceptance speech, Vivika said: “I’m really honoured to receive this award; it means so much to me. I really don’t think I would be here without the support and encouragement of my DT teacher Andy Thomson. I love the creative free reign that I had to work on individual self-initiated projects that solved problems that were important to me.”

Mr. Thomson, Director of Design Technology and Engineering, added, “It has been an honour be a part of Vivika’s journey through her time at Highgate. I remember her back in Yr7, she had all the right ingredients to be a creative problem solver, in a nutshell, an engineer! I was also impressed with her care for the environment and the way she focused her projects in helping people and the planet.  Over the years she had many successes in and outside of the classroom, from TDI winner, Arkwright Engineer scholar, Triumph Finalist and UK representative in Taiwan to name but a few. I have enjoyed every minute of it and it is students like Vivika which makes being a teacher fun. This award is such a great send off and gives her wings extra lift as she flies to the USA to study Engineering at UCLA. Well done Vivika.”

Having already relocated to California for her University studies, Mr. Thomson collected Vivika’s Award on her behalf.