The A level Geographers spent a week exploring the human and physical geography of Morocco over half term. 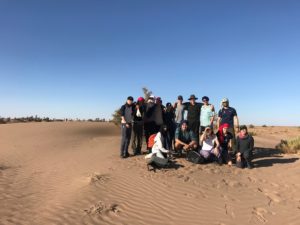 “After meeting at School at the antisocial hour of 4 am we boarded our flight to Marrakech. After the first of many tagines of the trip, we explored the souks of the Medina where the pupils were able to test their bartering skills buying local goods from the craftsmen themselves. 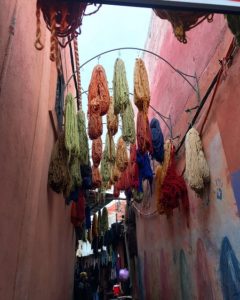 The next day we loaded up and set off for the Atlas Mountains, driving over the highest motorable pass at 2200m. After an incredible drive through the mountains we were dropped at a road head and hiked for an hour to reach the Berber village of Tichzka. We had a night in the village at a simple guest house and the pupils were able to experience with amazement how some aspects of modern life, such as 4G internet, had reached a village that was inaccessible  by road. We spent the evening discussing human geography and debated how best to tackle inequality issues before playing a mass game of bananagram. 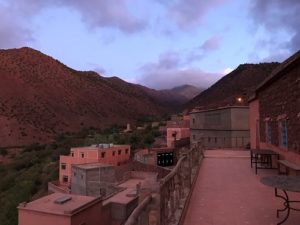 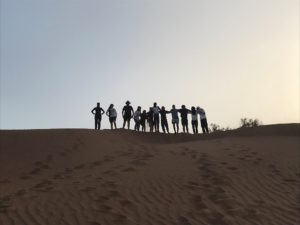 Leaving the next morning, we set off for the 5 hour drive south to the town of Mhamid, 40km from the Algerian border. The wind was whipping up a sandstorm as we bundled out of the bus in a clearing, to be met by 6 camels and their handlers. We set off into the storm for a 2 hour walk to set up our first night’s camp. 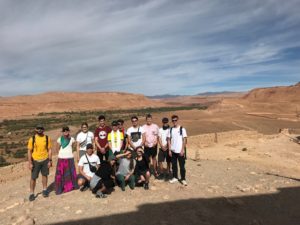 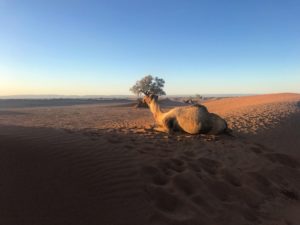 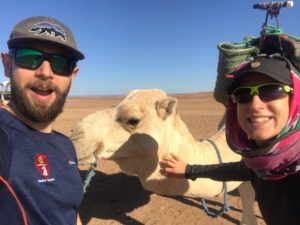 The next day the wind had dropped and we were treated to an incredible sunrise over the desert that had been shrouded in the storm the day before. We set off early for a trek that would take the whole day. The group were able to witness first hand everything that they have been studying as part of their A level course, and it was brilliant to see them engaging so much with the natural environment. 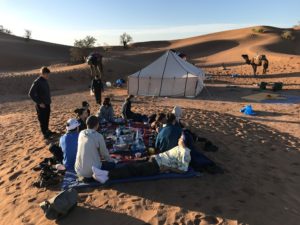 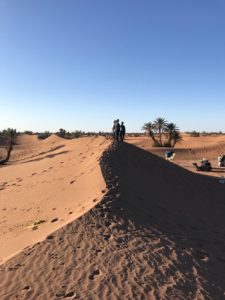 We sat out the heat of the day (34 degrees!) in the shade and then arrived at a new camp. When the sun went down the group stared in amazement at the starscape that no light pollution brings. We could even see the Milky Way. 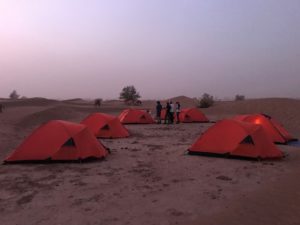 After a second night out under the stars, we left the desert and said goodbye to the camels and headed north for the UNESCO world heritage site of Ait ben Haddou. This 11th century Kasbah has been the site of many film sets, most notably Gladiator in 2000, and adopts a dominant strategic position in the middle of the D’raa Valley. 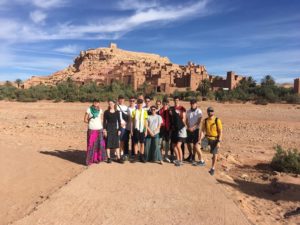 We explored  the Kasbah and spend a night in a beautiful Riad where we could enjoy a well-earned shower and bed before the journey back to Marrakech on the Friday. 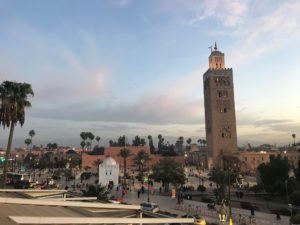 On our final day we managed to find spot to watch the Rugby World Cup (much to the delight of Mr Blackshaw) before going on a quad bike trek on the outskirts of the city. After a final tagine we set off for the airport for our flight home after a really adventure packed week!”