We celebrate two wins in the national Words of Unity poetry competition. Out of 2,400 entrants, Year 10’s Liv won the overall prize with her poem expressing ‘unity’, with Year 9’s Lila having her poem selected as one of three runners-up. Their entries were chosen out of thousands of poems from across the country. Liv has won £100 of vouchers and £500 worth of supplies for Highgate, and Lila has won £50 of vouchers.

The judges were very impressed with the quality of the entries and chose Liv’s poem as an imaginative and thought provoking piece that really stood out from the crowd. It was chosen by a panel consisting of Mike Haines OBE, founder of Global Acts of Unity; Imogen Russell Williams, children’s book critic and poet; and British-Cypriot poet Anthony Anaxagorou.

Odette Orlans, Alice Robinson and Roland Chambers from our English department expressed their delight at how exceptionally well our pupils performed in the competition:

“We were amazed by the range of responses conjured up by the one word ‘unity’, and by the maturity of ideas and feelings the pupils’ poems explored. We are very proud of Liv and Lila, and of all of our pupils, who took part with such enthusiasm and sensitivity.”

Liv, who also talked about her winning entry on Talk Radio, Sky Sunrise Radio, and in a feature in the Daily Express,  said: “I was thrilled when I found out I won the Words of Unity poetry competition. For me, poetry is a way to process thoughts and feelings. My English teacher inspired my class to enter and, after reading about Mike’s story, his passion, commitment and bravery really struck me.

“I chose to write about London. I’m proud and lucky to be a Londoner and in my poem I wanted to capture a moment when everyone feels united. It’s sometimes difficult to observe moments of togetherness and yet, short moments of solidarity, for example on a bus journey, are strangely beautiful and meaningful. For minutes, we all share a joint experience as passengers”. 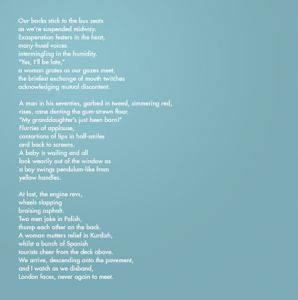 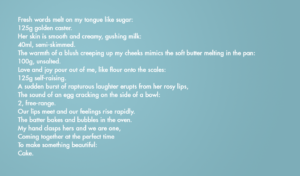