This term would usually see our Year 7 pupils taking part in a popular French trip to Lille, Y8 would have done it last summer. However, travel restrictions around Covid have meant we have had to press pause for another year and get creative with how we reinvent opportunities to experience France and practise the language!

Mrs Pettitt, Teacher of French, has brought Lille to Highgate instead. Lille@Highgate took the shape of a carousel of cultural and light-hearted activities “en français, bien sûr” for pupils to immerse themselves in. Over the past week we have had daily pop up boulangeries, games of Pétanque, short films and creative writing competitions! Awards will be given in the final week of term to the best pupils’ contributions and work. The most popular activity in Lille being a survey with the passers-by, teachers in school volunteered to pretend to be French and answered the pupils’ questions with gusto! What a joy to see pupils enjoying themselves while trying their very best to communicate in French.

“Just having a go is what matters – try, try, and try again!”~ Head of Modern Languages, Mr Watts:

“Highgate typically runs a dozen or so foreign language trips, visits, and exchanges each year, so these last couple of years have been very strange for us, indeed. Travelling abroad means meeting new people, and these encounters open our minds – it’s so important. Our students learn to communicate and not care too much about making mistakes; just having a go is what matters – try, try, and try again! Anything we can do then to bring languages to life, even here in Highgate right now, can only be a good thing!”

Pupils could practise buying and selling baguettes, croissants, and other delicious baked goods at one of the pop up boulangeries held across Lille@Home Week. 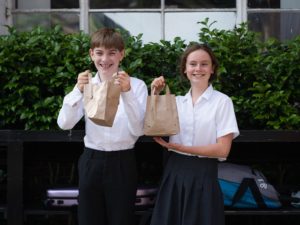 Getting creative with words

From French poetry competitions to short plays and films, the pupils have been exploring ways of communicating in another language and culture across different platforms

Click to view our Year 7 pupils practising their French singing via a recital of The Jungle Book’s Bare Necessities (internal link for parents and carers only). Winning videos are from 7JT and 7DM below.