Head Adam Pettitt, and Jan Balon, LAE Tottenham’s Headteacher, successfully completed their marathon, to raise money for Hardship at LAE Tottenham, from Highgate to the Tottenham Hotspur Stadium on Sunday. Over 30 members of staff and pupils completed remote challenges, including other marathons and 60km bike rides!

We are grateful for these efforts, which, collectively have raised, at the time of writing, over £71k from over 465 donors. The impact of this cannot be overstated. The campaign will run for another couple of weeks and we are so glad to have so many people involved. This could mean much-needed additional, weekly support for tens of LAE T students.

After concluding the marathon with a lap around Tottenham Hotspur Stadium, and a finishing time of 3 hours 42 minutes, Adam Pettitt said:

“Thank you so much to everyone who has sponsored us already, and to Jan Balon, without whom I don’t think this marathon would have been possible, and my son Louis, who was such amazing company for the first half with his cheerful chatter and bouncy stride.

Fantastic arrival at the stadium. The wind, rain and puddles along the River Lee were quickly forgotten though as we did a lap of the pitch (on the pitch!!!!) just as the sun came out: spectacular. 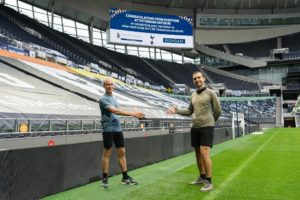 Thanks so much for all your kind words of encouragement and all the cheerful support, not least to Barbara and Millie, who cycled 50km, and kept popping up to give me drinks and gels on the course.”

How your support will help:

We have identified 200 families at LAE Tottenham who need weekly, ongoing support for essentials such as food, clothing and utility bills, and all donations to this marathon will be used to provide this support. LAE Tottenham is located in Northumberland Park, one of the UK’s most deprived areas, with 51% of students at the school being eligible for free school meals at secondary school.

Jan Balon said: “Thanks to those who have supported the LAET fundraiser, families will now receive support for food, rent and utility bills, and will now be able to keep their children focused on their studies here at LAET.”

You are still able to make donations to the Hardship fund, with every contribution helping to support our sibling school. Thank you for your support!

Much camaraderie and joviality was had during the course of activities this weekend, evidential of the strength of Highgate and LAET’s team spirit, despite the torrential rain, COVID-19 social distancing restrictions and differing levels of fitness. Sam Pullan, Head of Lower School, who took part in a lengthy run on Saturday evening, said “I think the final lap around the Spurs Stadium would have finished me off, being an Arsenal supporter.”

Many pupils have set up their own fundraising pages, with activities taking part across the coming week. Year 7 Chokhmah is running 5km, Year 8 Leyli went on a run with her father, Year 9s Felix and Rohan completed a 15km walk on Sunday (in 3.30!), Year 12 Ferdy is tutoring maths, with all proceeds going to LAET, Year 12 Natasha completed a 5K swim challenge in 1 hour, 11minutes and 35s and Year 12 Matt is cycling 100km and running a half marathon this Saturday.

Year 8 Leyli with her father 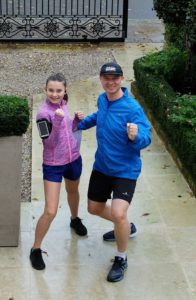