By Friday 5 March, over 1,200 Senior School pupils at Highgate will have had Lateral Flow Covid-19 tests prior to commencing back at School in person on Monday 8 March!

Mr Colin Henderson, Director of Pupil Volunteering and Community Engagement, says “It’s been a Herculean community effort of volunteering! We had over 105 parents and carers volunteer in various ways, with 69 involved in the actual testing. 40 staff have been involved in terms of organising, testing, processing, supporting not to mention the office team, cleaners, catering, porters who pulled it all together and kept us all fed and watered! Special thanks to our amazing Estates team who managed to construct the testing centre from scratch in such a short time! It’s the sort of thing that always makes me feel proud to be part of Highgate.” 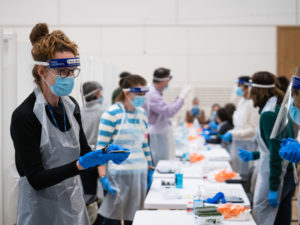 A Year 8 parent volunteer said, “There’s little that I’ve been able to control this past few months, but being able to help practically and meaningfully to get my daughter and the whole Senior School back in the classroom on 8 March was the reason I didn’t hesitate to sign up to volunteer.”

Pupils lined up (fully masked) in a carefully two-meter spaced queue leading up to the Junior School Hall. Outside in the misty Spring air, alongside the daffodils, and in the case of younger year groups, a parent/carer too, pupils shared their thoughts on returning to school physically next week.

Year 12 Theo reflected on how the situation has varied vastly for pupils across the country: “Education is the most important thing for young people, and while schools in the private sector have managed to provide online lessons during this time, state schools may not have been able to do this. We want to get back to a sense of normality.”

Opinions waivered between excited, apprehensive and hopeful that we are on the homeward run! Year 12 Iman said: “I’m slightly nervous because we won’t be vaccinated for a while, but I miss social interactions and seeing friends.”

Each of the pupils had been given designated test-times, and made their way into the sterile Hall which is operating as a meticulously organised Covid testing centre featuring numbered cubicles. 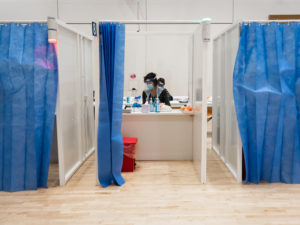 The testing event took place this week, with permission from the Department of Education, enabling pupils to return to lessons as quickly as possible on Monday. Next week, all 1,200 pupils (in addition to staff and volunteers) will be tested again, and a third time the following week before the Easter break.

Another of our parent volunteers commented: “A huge congratulations to all the Highgate team for such an impressive and efficient set-up! As volunteers, we have been fully supported through the process and there has been a wonderful sense of camaraderie. Feedback from the kids has also been very positive about their experience in the booths and coming back to school after so long. Well done!”

Thank you for everyone’s patience and co-operation in this enormous task actioned to make sure all of us are protected as much as possible from Covid, and that our pupils can return to their education and the School community safely. 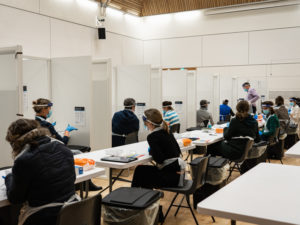