Last weekend a group of Y11, 12 and 13 pupils travelled to the Peak District for the weekend, for an outdoor rock climbing trip. This is the first trip we’ve been able to run since before the pandemic, so the pupils were naturally very excited, as were the staff! 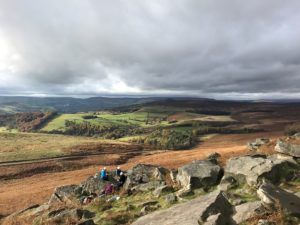 We stayed in Castleton in the heart of the Peak District, in the historic Loosehill Hall which is now a Youth Hostel. After a long drive after School on Friday, a hearty meal was enjoyed by all before getting an early night ahead of a packed weekend of climbing.

Saturday dawned bright, but cold and windy. We knew that there was rain forecast in the afternoon so made a quick getaway after breakfast to get up to the crag and begin climbing before the weather turned. We once again headed to the iconic Stanage Edge – a world famous mecca for rock climbing that has been the stage for many a pioneering first ascent. 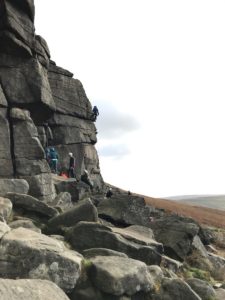 There was a mix of experience in the group; some were old hands whereas others had never been outside of a climbing wall before. The pupils climbed a variety of routes of varying difficulties including famous classics such as Heather Wall, Crack and Corner and Two-Tier Buttress up to difficulties of Very Severe. 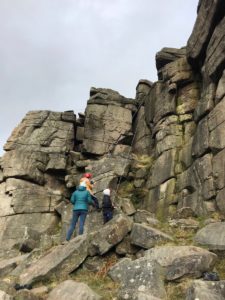 All of them did incredibly well battling cold hands and sore feet, pushing themselves beyond their normal comfort zones.  When the rain did eventually come in the afternoon, we made a swift retreat to take much needed shelter and refuel in the cafe in Hathersage.

Y13 Clare describes how it was “such a nice change to do some outdoor climbing” and explained how everyone “really enjoyed the fresh air and time away. While a few people crawled up the hardest walls in no time at all, others found their first time climbing outdoors challenging but fun. From hard severe climbs, to bouldering on the rocks below we all enjoyed the weekend in Hathersage.”

After a hugely filling meal at the Peak Hotel on Saturday, another early night was in order ready for more of the same on Sunday. The weather was kinder to us the next morning,  and we were able to pack in many more classics such as Castle Crack, Black Hawk Hell Crack and Manchester Buttress, all routes with 2 or 3 star ratings, before making our way back to London in the afternoon. 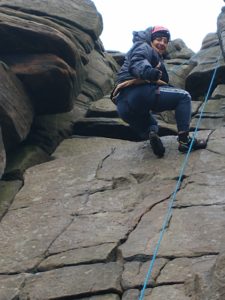 Hopefully this will be the first of several climbing trips this year. It is great to see the pupils able to put into practice the skills they learn indoors during their weekly climbing sessions for SpEx. Climbing at an indoor wall is great fun, and especially good training, but nothing beats the feeling of real rock beneath your finger trips!

Mr Taylor, new Outdoor Education instructor said “The recent climbing weekend in the Peak District was a fantastic introduction to the way in which Highgate facilitate learning and adventure within its trips. The trip was my first with the school and helped to build rapport with the pupils while understanding the individual methods in which they enjoy utilising the outdoor environment. It was not only an enjoyable experience for the pupils but also enjoyable and educational for me personally.”

Y13 Lucien said: “The trip was a great way for me to expand my knowledge of gear placement and line setup as well as building my experience climbing outdoors.” 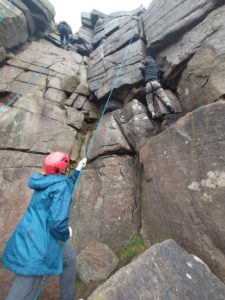