Pupils wear masks in School for the first time since WWII

This week marks the start of a new school year, a year that will be like no other because of the COVID-19 pandemic. Similar to other schools around the world, Highgate closed in March; the first time the school has closed in its history.

The past has always shown Highgate to be adaptable and resilient in the face of adversity. It survived turbulent times in the 17th and 18th centuries and two world wars. Highgate is no different today, building new ways of teaching and working while supporting key workers, NHS staff and the community.

On 1 September, pupils arrived at school as normal in their new school uniforms, however, this time they were also wearing face masks. The scene recalled the last time pupils wore masks at school, gas masks during the Second World War. Pictured is Peter Turnbull’s who was a pupil from 1942 to 1945. It serves as a reminder that Highgate survived the upheaval of the war years and will survive the challenges of schooling during a pandemic. 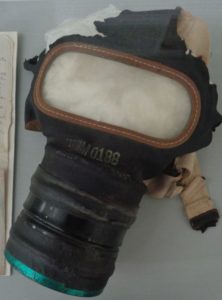