By Y8’s Maya Grace and Agastya

“Looking back at our first competitive season in Vex, it feels like we have been on a fantastic adventure from September when we started designing and building our robot, to January and February when we competed at Brunel University, Greig City Academy and then Fortismere School where we qualified for the National Championships. 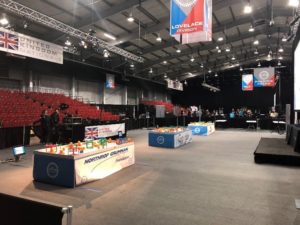 Arriving in Telford at the International Centre we were impressed by how large and well organised the event was with two separate stages for Lovelace and Brunel divisions along with spectator seating, commentators and even a livestream! It was so cool to have our own “pits” where we could setup our practice field, work on our skills and tune our programming. We had the privilege of “opening” the teamwork challenge as we were in match number 1 in Brunel division and even had an interview with the commentator. 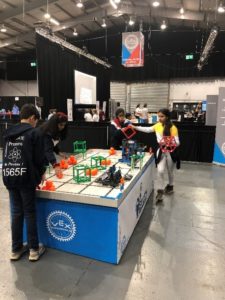 We were very nervous but luckily the first match was with team Veccelerate who we had met at a previous tournament and we got on really well with.  The time seemed to fly by during the day as once the teamwork challenge started there were matches roughly every half an hour. We were running around between matches to find the team for our next round so we could discuss tactics and practice with them. You quickly learn that talking to the other team in advance, understanding the strengths of their robot and then agreeing how you will approach the match are so important to get the best score you can. But it’s not all about teamwork as the skills challenge allows you to test both your driving and programming to see how much you can score. In the end we were disappointed with our skills score as in practice we had scored much higher with our programming, but it wasn’t reliable and how to make our program more consistent was a big lesson for us to take into next season. 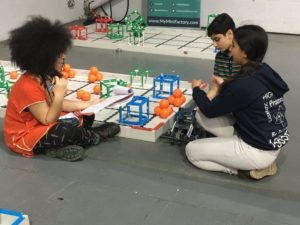 We really enjoyed talking to the judges about our involvement in Vex. Shrouk El-Attar came to talk to us just after we’d managed to drop our robot! At least that meant we could show her exactly how it was put together! Also talking to the teams and teachers from other schools was very interesting and it was great to be able to share our practice field with teams who hadn’t brought their own.

After teamwork we were in 14th position out of 58 teams and we were thrilled that we made it through to the final play offs on day 2. The matches were absolutely gripping and in between them the Award winners were announced.

It took a moment as we processed what the announcer was saying and then suddenly we realised; THAT’S US! and we positively sprinted onto the stage, full of energy (obviously), to claim the trophy. We literally could not stop grinning! Our finals match went well but other teams did better on the day. Even though we didn’t win in the teamwork challenge it was so entertaining to see the ecstatic reaction of the teams who did make it through to Worlds. Hopefully that will be us next year!

And so ended 2 days of sometimes intense, sometimes stressful but always exciting competition at the 2020 VEX IQ National Championships in Telford. Although we hadn’t qualified for the World Championships in Kentucky USA, we had competed well, learned a massive amount and stayed positive and whenever we walk past our trophy on the wall at School we will have a reminder of the amazing experience we had.” 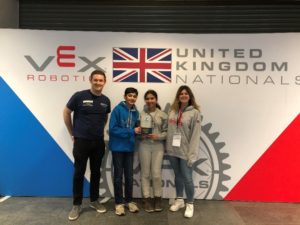