If you’re looking for a new interest, why not consider our Thursday lunchtime Reptile Club… It’s one of the more unusual of the 77 societies available for pupils to take part in at Highgate.

Led by Biology teacher Mr Atkins, the club was set up over twenty years ago by two pupils, and still attracts a dedicated group who congregate at the reptiles’ school home: the science department. Members meet each week to help look after our resident scaly pets: five rescue snakes!

Holly, one of our Year 7 members, explains why she joined: “It’s different to other clubs on offer, and separate to the curriculum like maths or languages. It’s also a way to get over any fears of snakes that you might have!” 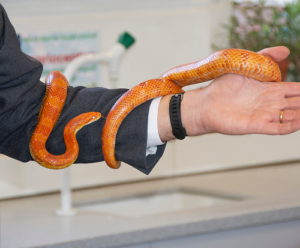 Stanley, Year 7, said: “I used to have a black and green snake called Fred at home. We had to buy mice to feed it! I come to this club because I still love snakes and I get to help look after them here instead.” 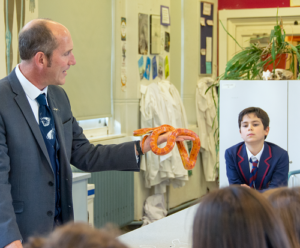 George, Year 8, said: “I like learning new things and it’s a great opportunity to gain specialised knowledge on reptiles!”

More information on the snakes!

There are currently five snakes kept at the School. There was a sixth member of the reptile collection, a fat-tailed gecko, who sadly died at the ripe old age of 15 last year.

Most of our snakes are actually unwanted pets, especially given to us by parents who can’t look after them once their sons and daughters have left to go to university. We also have some newts (amphibians) which were rescued from a disused swimming pool that was being filled in.

We have two identical looking corn snakes, one of which our pupils named ‘Red’ – simply because she’s red and orange! There are also snakes called Rebecca and Max de Winter, who are named after characters in Daphne du Maurier’s novel ‘Rebecca.’

How are the reptiles fed and cared for?

Our technicians provide them with dead mice once or twice a week. It is illegal and unethical to feed live vertibrate (backboned) animals to pets.

Who looks after them in the School holidays?

Being reptiles, they don’t need to be fed every day, so we leave them in School. Our technicians and Mr Atkins come in and look after them on a rota.

Red the corn snake measures around 141cms. The longest ever recorded snake measured 10 metres in length, and there’s currently a £10,000 reward for anyone who finds one measuring any longer! However, Red and her friends are unlikely to surpass 160cms once fully grown. 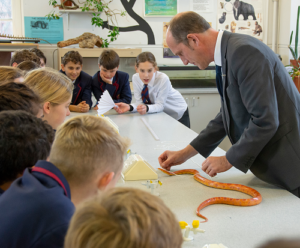