On Saturday 12 March, Senior School pupils from Highgate hosted an Anti-Sexism Forum with our partner state schools and other independent schools across London.

Around 50 pupils and staff came together for open discussions and to share ideas about how students and staff, together, can continue the important work already begun on eradicating sexism and sex-based violence.

The varied and intersectional programme of talks and workshops, from young people and external experts, during the Forum covered a broad number of topics related to anti-sexism. The event was just one small part of Highgate’s ongoing work in this area. The school has been working openly with pupils, parents and carers, staff and alumni to design and deliver our Anti-Sexism and Sexual Violence Plan, most recently updated and shared with them in March 2022.

The keynote speaker, Mary Sharpe from the Reward Foundation, talked about the impact of pornography on the brain and behaviour, relationships and what we can do about the sexism it can give rise to.

Following that, a series of optional workshops ran in parallel, to give pupils plenty of choice – topics included medical misogyny, gender and sexism at university, supporting yourself or a friend following sexual violence; intersectionality within feminism; and male allyship. 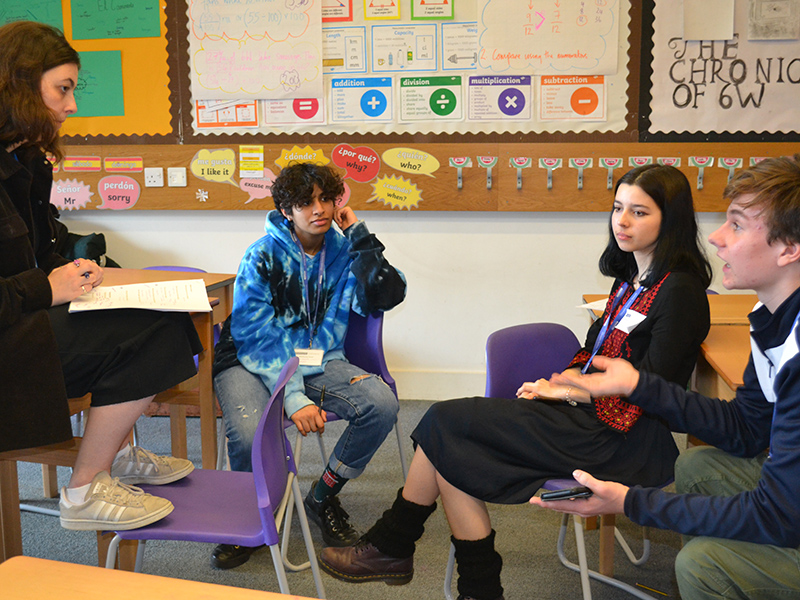 ‘Medical misogyny’ (delivered by Highgate pupils based on their research) focused on the sexism found in medicine, and the devastating impact this can have on health outcomes for women.

‘Gender and Sexism’ at University was led by Dr Jessica Wade from Durham University, who spoke about decolonising the science curriculum in terms of both race and gender, and discussed with pupils what they could do in their own schools to make science more diverse.

‘Supporting yourself or a friend’ was guided by Hezena Lees-M’Langa from Solace Womens’ Aid and gave students opportunities to practice grounding techniques as well as consider practical strategies and different avenues for support after sexual violence.

A session on ‘How inclusive is feminism?’ (delivered by young people from Highgate based on their own research and experience) explored the intersections between gender and race in feminist discourse. As part of this workshop, pupils who attended this session were invited to consider the additional barriers that those from minoritised ethnic groups or who are LGBTQ+ face because of their ethnicity, gender identity and/or sexuality, giving examples from education, health care and the media to start an open discussion with those who attended the session.

Finally, a workshop on ‘male allyship’ was led by young people from Highgate, including those who are already engaged with the school’s bystander intervention training and allyship programmes. The purpose of this session was to talk about the ways that young boys and men in particular can listen to women and girls and use their knowledge and influence over their male peers/friends to make the world safer for women and girls and therefore for everyone.

During the afternoon, ‘toolkit’ sessions enabled pupils to design resources and ideas to take back to their own schools to lead anti-sexism initiatives within their own community.

Pupils from all schools made pledges for achievable targets for their schools in the year ahead. For Highgate, in addition to the ongoing-anti-sexism work, the pledges include:

Some feedback from those who attended the event, included:

Martha (Y13), one of the leading organisers, said: “Over the past year, many schools have realised the importance of engaging with student voices, those with lived experience and external experts, in the push for gender equality. At Highgate, we felt that a forum would be a great opportunity to bring together pupils from a number of schools with similar goals to participate in collaborative discussion and shared learning that would lead to positive actions back in our own communities.”

One pupil said their favourite thing about the workshop “was the open and honest discussion that took place – so good that people stayed behind at the end to keep talking! It was truthful and helpful, and a really successful workshop.”

Another said, “It was nice to remember that there are other aspects of sexism in different genders. A lot of it was to do with trans-women and trans-men and it was a completely different end of the spectrum, which I wasn’t actually aware of in the first place.”

Other comments from pupils include: “These conversations are valuable within themselves but being able to have them with other leaders and then be able to take back the ideas that we developed and implement them in our own school. The talks have given us some sort of structure.”

It “gave us a lot of really good ideas for what we want to enact in our PSHE curriculum.”

The Student Anti-Sexism Working Group at Highgate School, who coordinated the Forum, have offered a response to recent media coverage about this event, below.