Last week, Year 4 put on a mini play called The Lucky Viking, as part of their learning about History.

The children helped create the stage set and costumes to fully immerse themselves in theatrical production! Year 4 Alyssa said ‘I played as Sigrid Smelly Feet! We had to make shields for the Dragon Ship boat which was a lot of fun! The cloud lights were really cool, as well as the campfire!’

As well as being great fun, it helped build the pupils’ sense of team work and self confidence. Year 4 Louis said how much he enjoyed performing in front of an audience: “I played Odin and I had a beard, wig, eyepatch and cape. I had 16 lines and enjoyed speaking. It was amazing!’

Sigrid Smelly Feet is on the stage! 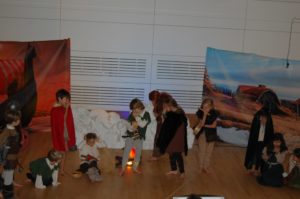 It was an extra important day for Year 4’s Emilia too: ‘It felt special because it was on my birthday. It was also so exciting that we had an audience not like last year.’

To sum up the experience of putting on a play as a year group, Alison gave a heartfelt testimonial: ‘Thank you so much for organising the best play ever! I just wanted to say that I really enjoyed it and I would really want or encourage you to make more. It was such fun! Thank you!’ 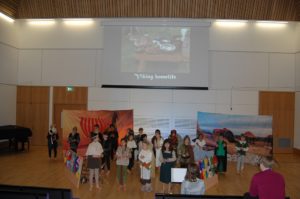